Terry Taylor has been exploring for about thirty years the complex and sometimes strange affiliations that convene in all human life: pleasure and death. Using representations of skulls and human skeletons as fetish objects or objects of fantastical projection, her paintings dig deep within the black of her canvases, seeking the mystery of the speaking body and its eternal malfunction.

Her last exhibition, presented at the Gallery Suzanne Tarasiève, is made up of a series of paintings which stage the seven deadly sins (pride, greed, envy, anger, gluttony, sloth and lust), and of a series of miniature portraits representing 49 personalities who have marked human history with their ideology, authority, and cruelty (Hitler, Caligula, Blue Beard, Ivan the Terrible, but also John Paul II, Lucrezia Borgia, Mata Hari). Through this double structure that resembles a Christian diptych, or a musical fugue in two voices, Taylor invites us to meditate on the relationship between the universal aspiration towards sanctity and the singular fall into evil. Denouncing human cruelty in an edifying way, her exhibition also magnifies it by paying a paradoxical homage to the men (especially tyrants) and the women (especially courtesans) who have turned our history into a tragedy.

To reach her goal and to provide the stage for it, it is first the art of Velázquez (for anger), of Hogarth (for greed), of Bosch (gluttony), and Caravaggio (envy) that Taylor calls into play. It is also in the tradition of Vanitas and that of Momento mori (“remember: you’re going to die”), that Taylor finds her inspiration in order to think through the tenebrous links between pleasure and death.

The art of Momento mori, far from being reducible to the interpretations that the Christians have given it (based on the notion of repentance before death), was understood differently during Antiquity. For an author like Horace, for example, the idea of Momento mori was not connected so much to the idea of the last judgment, but to his famous formulation, which Ronsard immortalized, Carpe Diem (“seize the day”); a formulation which has no other meaning than to incite men and women to eat well and drink well, since death has not yet come to tear them from this life. To put it another way, while the Christian tradition uses death to denounce the illusory nature of pleasures (Vanitas), death functions, in a pagan context, as a way to urge men to enjoy each day of their life as if it were the last (Momento vivere).

From this ambiguity and paradox it also becomes possible to give the humour that runs through Taylor’s works, a double interpretation. Indeed, along with and against the fact that Taylor’s paintings represent “dark” themes—executioners, dictators, torturers, despots— in colours inspired by masters of the chiaroscuro, the fact remains that her paintings vibrate with a strange laugh: a laugh which sometimes seems to come from the skeletal figures themselves, and sometimes from the way the skeletons are staged. In the skeletal figures, the laugh is not unlike that of Satan, which, as Baudelaire points out in The Essence of Laughter, “is always linked to the event of the ancient fall, to a physical and moral degradation.”

On the other hand, with regard to the comic effect found in her compositions, it is rather in the laughter of the wise, as Bossuet defined it, that an explanation can be found. Indeed, in opposition to Satan’s cruel laughter, the laughter of wisdom is based on the empathy felt for those who suffer. To be convinced of this, one only has to dive into contemplation of her work representing the sin of spiritual laziness (Acedia), belonging to the series of The Seven Deadly Sins. In this painting, Taylor has painted laziness in the form of a skeleton which, taking three “nice sloths” (three speechless beings) into its right arm, points with the other at the skeleton of Christ on the cross. This representation, split in two by a doubling game of mirrors, suggests that the Christ will only be able to save the infinite horde of sinners —the horde that makes up The Hit List—on the condition that the sinners believe in their possible resurrection. Momento mori.

This video was put together for my current exhibition at Galerie Suzanne Tarasieve in Paris. The Hit List & The Seven Deadly Sins will be showing until 20 February 2016. Following that, I am very excited about my upcoming solo show in Essen, ‘Time Will Tell – The Five Senses’, at Galerie Frank Schlag. 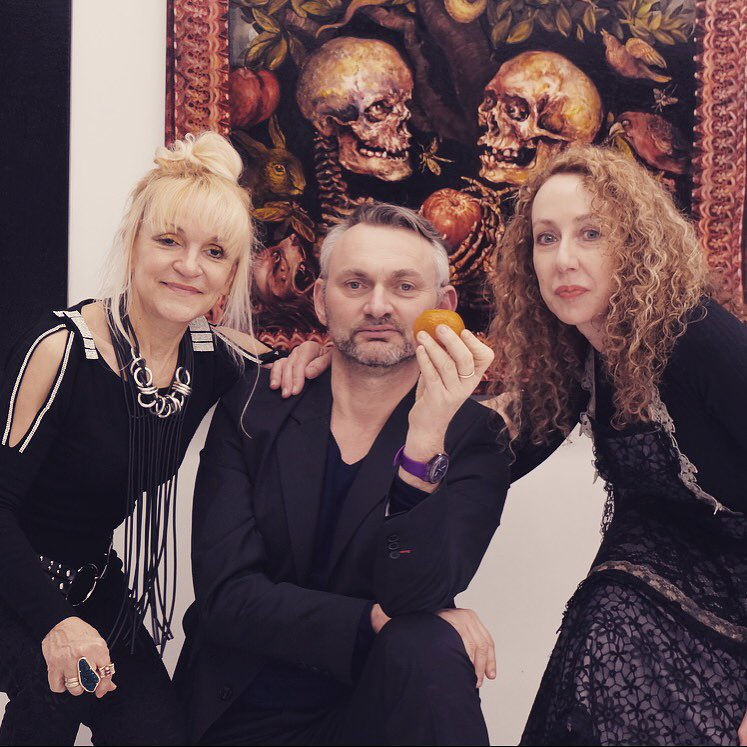 To purchase one of these prints please contact Chapman & Bailey